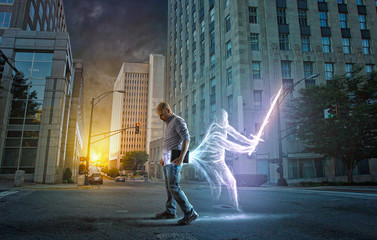 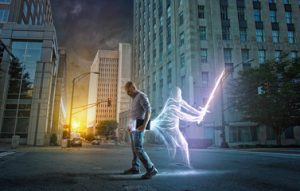 To fight means to have a physical encounter with someone or something. Fighting the good fight of faith is to stay focused while you work through a circumstance by faith. Temptations will arise, trials will come, staying focused in faith according to the grace bestowed upon us in what guarantees the ‘good fight’. After everything Paul had gone through in his life time, he was able to write at the end of his days that he has fought the good fight. Why? He never gave up. He kept on pressing until he got to the finishing line strongly (2 Timothy 4:6-7).

Do you know it is possible to fight wrongly? You cannot fight a spiritual battle with physical strength; doing this will only result in frustration and defeat. We should not be ignorant of the devices of the devil lest Satan should get an advantage of us (2Corithians 2:11).

It is a common misconception that once we accept Jesus as our Lord and saviour, everything becomes effortless. No! You need to fight the good fight to possess your possession. Since the day of John the Baptist, the kingdom of God suffers violence and the violent takes it by force. That force is the faith you need to push through! In this fight of faith, you need to put on the full armour of God out of which faith is one of the most important. It is the shield of faith that puts off the fiery darts of the devil.

There is a difference between fighting and fighting well. A lot of fighters lose their lives on the battlefield not because they were not good but because they fought wrongly. The enemy is only looking for a loophole; a place where he can attack and get rid of you before you realize it. It would have been easy for anyone to fall for the temptations the devil gave Jesus. The devil’s mission was to clear Him off the path of the journey to man’s redemption. He said if thou be the son of God, jump from this pinnacle. After all, God promised to give His angels charge over you. Jesus knew his plans, and he replied to him saying “thou shall not tempt the Lord your God.”

It seemed harmless for Jesus to have felt swollen-headed and tried to prove to the devil that he was the son of God. Christ knew he needed not to prove anything to the devil. He knew at the right time even the devil would confirm his legitimacy. Temptations sometimes come with decorating wrappers. They appear attractive and harmless, but they are there only to make you waste your strength trying to prove what should be left unnoticed – fighting wrongly.

How do I fight the good fight of faith?

There are many ways to fighting the good fight of faith, but a few would be mentioned below.

Temptations are there to trigger your fighting force. The good fight of faith brings out the best in you. There would be no fragrance without the crushing of flowers neither would there be wine without squeezing the grape. So, whenever you fall into temptation, count it all joy (James 1:2); do not be afraid for His presence is with you (Isaiah 43:2).