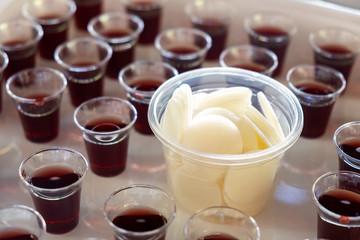 Christians as saints of God have been elected and called to partake in the spiritual things of God. It is a privilege for us as Christians to become involved in things that God has ordained because every practice given to us through Him is holy and for our benefits as His children. The Holy Communion is one of those privileges. For some, the Holy Communion is an ordinary and scheduled time of the eating of bread and wine or similar beverage; while some see it as a doctrinal practice with little or no significant meaning. If you’re a Christian, it is good that you sit down and meditate on some practices in the gathering of God’s people and know their significant meanings in the fold of the saints. This is so you can be a teacher of right knowledge and confident about what you do in the name of God. As a Christian, every of your practices must be defend-able and you mustn’t be ignorant about them, at least at a basic level of knowledge. You are not to be like some in the Church of Corinth in those days who saw the Holy Communion as an avenue to quench hunger or satisfy their wine cravings with its excess, (1 Corinthians 11:21).

The Holy Communion, also known as the Lord’s Supper is a spiritual practice of the New Covenant. Firstly, you must understand that when we as Christians partake in the Holy Communion, we are proclaiming the Lord’s death till He returns, (1 Corinthians 11:26). That is, it is a sign of remembrance of the Lord, since the practice and instruction was given by Jesus Himself on the Night He was betrayed, which marked His journey to crucifixion. It is an assurance that the Lord died indeed for our sins; and we are also expecting Him in the second coming when the saints will have a similar scenario of feast or supper in the Kingdom to come, (Matthew 26:29).

Also, you must understand that the bread and wine being eaten and drunk in the communion is an insignia of the New Covenant that was established; the body of Christ and His blood that was shared for us for the remission of sins. The real event was when The Lord Jesus was crucified on the cross, His body pierced, and His blood left His veins and poured out of Him, revealing the painful death he suffered for us all, and as many that received and believed in His death and resurrection will be saved from sins; while the eating of the bread and drinking of the wine is a sign that we are partakers of the forgiveness of sins which was made possible by the death of Jesus. The bread and wine is like a medicine against sins, since it’s being shared for the remission of sins. So the spiritual significance can mean that we are more empowered spiritually when we take the Holy Communion in such a way that we recognise the meaning of what we are doing.

When we take the Holy Communion, as knowledgeable Christians, we are to know and understand that it is an avenue that reminds us of the joy of salvation. Even though the Last Supper was filled with sorrow because of Jesus that was unjustly arrested and killed, yet it is a joy for saints in the remembrance of salvation that was priceless which no one could have done for men except the Lord Himself.

Taking the Holy Communion is also a means of identification with the Household of faith. It shows that we are a peculiar people of God; and the Communion itself isn’t just a gathering of the saints, it is a gathering of fellowship with the Lord, that is, a spiritual means whereby we commune our hearts and feelings with Jesus. In it, we join our hearts with the Lord and remember the promises of God, thereby looking up to Him to fulfil His many promises to us through prayer because He said, ‘‘where two or three are gathered in His name, there He is in their midst,’’ (Matthew 18:20).