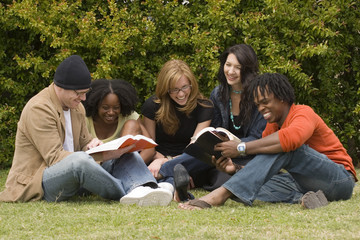 Being led by the Spirit in this context is not having His special guidance in making decisions. We have that as children of God, but that’s not what this is referring to. Being led by the Spirit here means being enabled by the controlling power of the indwelling Holy Spirit to put to death the destructive activities of our sinful human natures and walk in obedience to the Lord. It’s the same as walking “according to the Spirit” (verses 4 and 5). And when we walk in step with the Spirit, led and empowered by Him, which gives us the confidence that we are truly the sons of God. It doesn’t make us sons of God, but it confirms the fact that we are.

You understand that “sons of God” are not just the males in the family. It’s a term that emphasizes a child who has come of age, an adult child who enjoys all the rights and privileges of his position. The reason why the Bible uses “sons” is that in the culture, it was only the males who enjoyed that honoured position. But in God’s family, there is neither male nor female according to Galatians 3:28. “For you are all sons of God through faith in Christ Jesus (Galatians 3:26).

We’ve all heard the question, “If you were arrested for being a Christian, would there be enough evidence to convict you?” It’s a good question. If the evidence isn’t there, that may be the reason to doubt that you are truly a child of God.

Is there any evidence that you are a son of God? Do you love the word of God? Are you drawn to communicate with Him in Prayer? Do you love the people of God and enjoy spending time with them? Do you enjoy telling others about God? Do you like to talk about God more than you like to talk about business, taking trips, following sports, or anything else? Do you have a deep desire in your heart that people will see that you are pleasing your Father? We are not trying to do all those things just to prove that we’re sons of God, but we do them because the Spirit of God is in control of our lives.

The Characteristics of Our Position

What does it mean to be a son of God? Let’s find out what Romans 8:15 says “For you did not receive the spirit of bondage again to fear, but you received the Spirit of adoption by whom we cry out, ‘Abba, Father.'”

It means basically these things:

“For you did not receive the spirit of slavery.” The word “spirit” is spelled correctly with a small “s”. It does not refer to the Holy Spirit, but to a temper, mood, attitude or disposition. When we become children of God, we are not given the mentality of a slave. Remember chapter 6? The proclamation of God’s emancipation has freed us from the bondage of our sinful human nature. “Because sin will not reign over you, for you are not under the law, but under grace” (Romans 6:14).

We don’t need to live like slaves, fighting helplessly against a cruel and powerful master. We are in the family and we have a position of privilege and honour. We are free to come and go; we can make our own decisions; we have access to family resources. This is freedom. And it makes us want to please our father.

For you have no longer received the spirit of slavery to fear, this is what they had under the law. Israel trembled before the mountain that trembled and burned, fearing that God would stay and kill them. They fear the law that provides for the death penalty. They feared to enter the Holy of Holies on pain of death. They had a frightening awareness of God’s incredible holiness, their own sin and their separation from God. Today, some people live in that kind of fear.

They see God as an angry and selfish tyrant, who is just looking for a good excuse to rape one as if they were fat children or rebellious slaves. But true believers don’t have to live in that kind of fear. We are the children of God. And He did not give us a spirit of fear, but of power, love and a healthy spirit” (2 Timothy 1:7). And knowing this will make us want to please Him.

A favoured position in the family of God brings us to the great doctrine of adoption and you have received the Spirit of adoption. In the Roman world, the legal position of a child was a little better than a slave. A child is the property of his father, without any right or privilege of his own. His father had the right to take any income he might have, to sell him into slavery and, in certain circumstances, to put him to death. Rights and privileges were reserved for adults and a child had to be declared an adult by his father before he could benefit from it. He had to be placed in the privileged position of an adult son. And it is an idea in this word adoption. In his letter to the Galatians, Paul said that we are no longer children, but that we have been adopted as sons (Galatians 4: 3-5).

The word has also been used as we use it today, granting all rights and privileges of parentage to one who was not by nature of the family. In the Roman world, a man without a male heir could adopt an adult into his family. His new son would abandon his old family name and all of his old family associations in order to perpetuate his new father’s name and inherit his estate. He was in no way inferior in status to a son who could be born into the family over time. This is another idea in this word adoption. Although we were not by nature the sons of God, but God adopted us into His family. And He didn’t bring us into the family in a bondage position. He immediately placed us in the privileged position of adult sons. Our Heavenly Father invites us to take advantage of this degree of intimacy with him and accepting his invitation will make us want to please him.