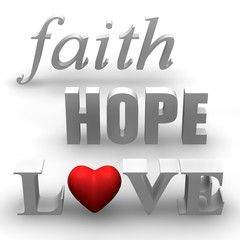 Christianity is defined by love, which is why love is so vital. God is love, and the highest expression of that love was Christ Jesus’ sacrifice on the cross. We’re commanded to love others as we have been loved and to forgive them as we have been forgiven by the Father out of his tremendous love for us. Biblical love is much more than an emotion; it determines who we are and who we belong to. Christ, Himself, is the source of Christian love. Because of the Holy Spirit’s presence in us, we have love. Christianity isn’t the only religion that values love. Christianity is based on love. To love is to be a follower of Jesus Christ. Let’s examine some patriarchs of old that walked in love as required by God

1 Kings 3:14 “And if thou wilt walk in my ways, to keep my statutes and my commandments, as thy father David did walk, then I will lengthen thy days.”We learn that Solomon demonstrated his love for God by following his father David’s directions. Solomon’s desire for wisdom was one method in particular in which he affirmed his relationship with God. After Solomon had presented a thousand sacrifices to the Lord, one night,”In that night did God appear unto Solomon, and said unto him, Ask what I shall give thee” 2 Chronicles 1:7.

God was pleased with Solomon’s request, so he bestowed extraordinary wisdom onto him. The Bible teaches in 2 Chronicles 1: 11,”And God said to Solomon, Because this was in thine heart, and thou hast not asked riches, wealth, or honor, nor the life of thine enemies, neither yet hast asked long life; but hast asked wisdom and knowledge for thyself, that thou mayest judge my people, over whom I have made thee king:”

God saw the true love of Solomon to his people, and this got him a blessing that is far beyond human comprehension.

Esther is a young Jewess who wins the heart of King Xerxes of Persia and is made queen; yet, she does not grow pompous and proud to the point of forgetting her identity. When she learns of Haman’s intention to exterminate the Jews, she rallies behind them, putting their needs ahead of her own, and humbly following Mordecai’s advice, she exploits her royal position for their benefit.

“For the Lord, your God is he that goeth with you, to fight for you against your enemies, to save you.” Deuteronomy 20:4.With the prospect of execution looming, Esther planned meticulously for her journey to break the law and approach the king uninvited to speak for her people. She fasted for 3 days with no food or water, but she forced the Jews to join her, demonstrating that they were all pleading for God’s deliverance. The Bible made it known in Esther 4:16 “Go, gather together all the Jews that are present in Shushan, and fast ye for me, and neither eat nor drink three days, night or day: I also and my maidens will fast likewise; and so will I go in unto the king, which is not according to the law: and if I perish, I perish.”

But, by God’s goodness, she was spared. Instead, Esther won the king’s favor when he offered his golden sceptre to her; meanwhile, Haman, the Jews’ foe, was hanged on the very day he had planned to slay them.

Esther’s courage and faith speak to us now in our world, where God calls us to love others as we love ourselves, to show that He is with us, and to act on behalf of people in need, regardless of age, gender, ethnicity, or culture, in the face of societal wrongs and injustices.

Daniel received a message from God. Daniel lived close to the Lord and for God’s kingdom from the time he was approximately 18 years old. God revealed the deep mysteries of heaven to Daniel, a prophet. God’s words to Daniel are extremely difficult to comprehend. Daniel possessed a specific kind of faith that enabled him to draw from God the strength to comprehend His mysteries. Daniel imparted God’s knowledge and wisdom, as well as the mysteries of God’s actions. He walked in intimate proximity to God. Daniel’s religion and Babylon’s religion were diametrically opposed. A young man was living very near to God in a place of complete darkness. What a source of inspiration for us! Some of you may be forced to live in deplorable conditions. Daniel had the ability to glimpse into the future kingdoms. He could see Christ, the stone that had not been carved by human hands. He rose to a level where he might appreciate the mysteries of God—the riches of heaven—through prayer and sanctification. He anticipated a future period when, after Jesus’ life on earth, the temple worship would be abolished. It’s difficult to accept the future as it has been revealed. You’ll start crying immediately away if God tells you when yourFather or mother will die. God holds the secrets of the universe in His hands. Those who dwell in His presence and share His mysteries are blessed. Daniel discussed God’s deep mysteries with Him. He experienced a lot of dreams and visions. He has left us with a large number of spiritual literature. God desires to reveal to His beloved children His kingdom’s future intentions, or at the very least His plans for them. Daniel was a staunch defender of Jehovah’s name in the heathen region. God would like to share His plans with you based on your heart’s devotion. God came to Abraham’s house because his heart was so close to God’s.And God said in Genesis 18:17,”Shall I hide from Abraham that thing which I do;”He couldn’t keep this to himself and didn’t tell Abraham about it.

Many things will be given to you by our loving God. Daniel was so near to God that his dreams, words, and interpretations were all prophetic. One young person may be such a blessing! On that historic night, he interpreted the writing on the wall as “mene mene tekel upharsin.” That judgment was fulfilled within a few hours after that interpretation. Is Daniel a bail bondsman? Can you be a slave when God’s mind enters you? He wasn’t a commoner; he was a ruler. If you live close to God, big men will come to learn from you, and God will disclose the future to you.

The Bible made it known to us in Daniel 12:13 “But go thou thy way till the end be: for thou shalt rest, and stand in thy lot at the end of the days.” Each one of us will stand in our lot at the end of our days according to our walk with God now.

“And Elijah the Tishbite, who was of the inhabitants of Gilead, said unto Ahab, As the Lord God of Israel liveth, before whom I stand, there shall not be dew nor rain these years, but according to my word.” I Kings 17:1.Elijah is portrayed as a man of faith, prayer, and courage who was rewarded by God despite his flaws. He is set up as a role model for us to emulate. As a guy who shares our passions, his life exemplifies the magnificence of the Bible’s God, His purposes, love, and care for His people in a world in dire need of Jesus Christ’s salvation message. Elijah’s journey also symbolizes the necessity for God’s people to live with Him by faith, utilizing the privileges of prayer and understanding of His Word.

Elijah’s story and the nation of Israel is a heroic tale centered on the main character, Elijah’s accomplishments. It is the narrative of a guy who was raised by God during a period of war in his society, as well as a period of spiritual and moral degeneration. He was sent to restore the nation’s confidence in God, to lead people away from idolatry and toward a vibrant faith in the genuine God, the God of Israel, and the Bible.

The protagonist, central figure/hero, and his conflicts and interactions as the story progresses toward the narrative’s objective are the emphasis of heroic storytelling. In the book of1 Kings 18, the challenge and contest with the prophets of Baal in front of the people on Mount Carmel, we find the narrative’s purpose and the story’s high point.

In two places in the story, the meaning of this high mark is spelt out for us.I Kings 18:21 “And Elijah came unto all the people, and said, How long halt ye between two opinions? if the Lord be God, follow him: but if Baal, then follow him. And the people answered him not a word.”and 18:37″Hear me, O Lord, hear me, that these people may know that thou art the Lord God, and that thou hast turned their heart back again.”

The preparation for this event is covered in Chapter 17. It demonstrates how God has prepared Elijah and the country for the events on Mount Carmel. The consequences of this incident on the nation and on Elijah, the hero, is discussed in Chapter 19.

It is crucial not to miss the fact that the hero or heroine of a heroic story is a representative person. To put it another way, the story and its protagonist are representative of the human predicament as a whole. There are various stories associated with this patriarch, but the bottom lesson is that the righteous must first know what to do and proceed to do it because they know and believe that God sits observantly in the sky. The virtuous should not withdraw, become bitter, angry, despondent, ill in our attitudes, or seek sinful ways of escape.

God’s love is trustworthy, and His promises are unbreakable. He has never failed to save a single soul or to keep a single one. As our environment moves and the noise threatens to make us whole, we place our faith in God’s love. With David’s petition of not being ashamed of depending upon God, true Christians can come boldly to the throne of grace with the challenging word in Psalm 71.

Love is God. That love is perfectly expressed in Jesus. Love came to earth and exchanged the beauty of heaven for the glory of man! Christ Jesus is the way, the truth, and the life. We can find our way out of chaos and tragedy by navigating the world’s trials and tribulations. Love is the source of our power. God’s love, the living God, resides in us via the power of the Holy Spirit. Much of the Bible’s hope is centered on human, temporal, and worldly issues. Much of the Bible’s hope is based on a better individual and social adjustment to life and the world. People’s further hope is frequently placed in God in each of these circumstances. When our comforts, people, accomplishments, and other things are taken away from us, Psalm 71 reminds us that our hope is in the Lord’s Love.