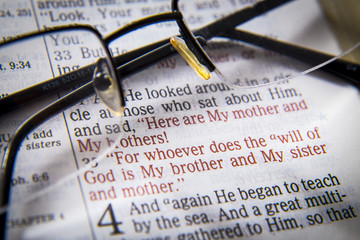 Now in the sixth month the angel Gabriel was sent by God to a city of Galilee named Nazareth, to a virgin betrothed to a man whose name was Joseph, of the house of David. The virgin’s name was Mary. And having come in, the angel said to her, “Rejoice, highly favored one, the Lord is with you; blessed are you among women!” Then the angel said to her, “Do not be afraid, Mary, for you have found favor with God. And behold, you will conceive in your womb and bring forth a Son, and shall call His name Jesus. – Luke 1:26–28, 30–31 NKJV

For a moment, I want you to imagine an angel coming into your room while reading a book or tidying up your closet; and ignoring the bewildered look on your face, the angel goes on to tell you He was sent by God to give you a promise of what has never been seen in the world before. I’m sure you’d be both surprised and scared! While it’s okay to be surprised (God likes surprising His people a whole lot), it’s not okay to be scared. Fear – of any sort – does not come from God!

I also believe that you’d feel special, right? You will know that God cares for you so much that He knows your home address, He knows what time you’d be back home from work or school, and He even knows the exact room where the angel can locate you in the house. Just like Mary was, you’d be really glad and amazed to know that ‘the Lord is with you’.

Mary was just a girl who had her own plans and goals for her life; she planned to get married to a man she loved dearly and the wedding was to hold in the near future, probably in a few weeks or months. Her fiancé, Joseph, was also preparing to wed his beautiful sweetheart and then they’ll both start a family together. Then, suddenly, they got the biggest surprise of their lives! Just before they could have their wedding and legally become man and wife, God sends an angel to announce that Mary will become pregnant as a virgin who had never been intimate with a man! He goes on to say that Mary will give birth to the Son of God (See Luke 1:34-35). And this is the beginning of the world’s greatest mystery (to those who believe) and the world’s greatest controversy (to those who disbelieve) – the incarnation of God’s beloved Son, Jesus.

The birth of Jesus Christ is probably the most controversial the world has ever heard of; it is so controversial and unbelievable to the [unbelieving] world that there are endless arguments and debates over this event. The world (those who don’t believe in God’s power or His existence) never accepts what it cannot prove using scientific methods. However, the unbelief of the world cannot change the fact that God exists and is able to do whatever He pleases to do.

However, Mary was not unbelieving. Probably because she was familiar with the stories of God sending angels to men [recorded in the Torah], it was not a problem for her to believe that ‘with God nothing will be impossible’. Even though Mary didn’t understand just how she could conceive and bear a Child without being intimate with a man, she knew that God had a purpose for this, just like He had when He caused Moses to see a burning bush with an angel appearing to him. Joseph, a gentleman who was been looking forward to paying the bride-price for his beloved bride and starting a new & beautiful life with her, was confused by Mary’s experience. However, God ends his confusion by sending an angel to speak with him in a dream.

Now the birth of Jesus Christ was as follows: After His mother Mary was betrothed to Joseph, before they came together, she was found with child of the Holy Spirit. Then Joseph her husband, being a just man, and not wanting to make her a public example, was minded to put her away secretly. But while he thought about these things, behold, an angel of the Lord appeared to him in a dream, saying, “Joseph, son of David, do not be afraid to take to you Mary your wife, for that which is conceived in her is of the Holy Spirit. And she will bring forth a Son, and you shall call His name Jesus, for He will save His people from their sins.” – Matthew 1:18–21 NKJV.

Today, the world is a much better place to live in because Mary yielded herself to God’s purpose. Humanity’s greatest diseases which could not be cured medically – SIN & DEATH – has been rendered powerless by the Son of God as was prophesied by the angel. This happened because Joseph believed God’s purpose as revealed by the angel who appeared to him and he allowed Mary carry the pregnancy full term before they came together as man and wife.

Of course, the devil tried to cause as much problems as he could by making sure there was no good place for Mary to deliver her Baby when the time came (See Luke 2:1-7). Unfortunately for the devil, he didn’t know that Baby Jesus could be born even in a manger since He won’t be needing the medical attention/supplies usually available in maternity homes/hospitals. I mean, if God took the time to send angels to announce Jesus’ birth to Mary and Joseph, then God must have positioned angels to ensure the safe delivery of His Son! Most certainly, God pays attention to details!

The world’s most important event began in a most unlikely place – a manger. Joseph and Mary sacrificed their convenience for God’s purpose and never complained or spoke against God because their Baby wasn’t born in a standard hospital. As the birth of Jesus is being celebrated all over the world, what are you willing to sacrifice for Jesus? Whether it is feeding the hungry, or paying a visit to the sick, or clothing the naked, make sure you DO something that proves the love of the Savior to the world!