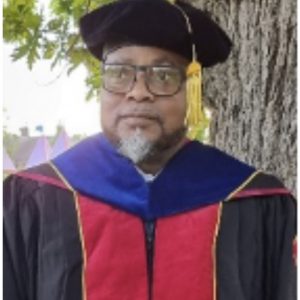 DR. Michael Agunbiade (missionary) was born a prophet into an orthodox church, was subsequently called into the Band of The Prophets at the age of seventeen and groomed to become a Rabbi. He left the Orthodox Church in April 1986 following a specific divine instruction to; “BE BORN AGAIN.” He rededicated his life to God (Visionary) in Yeshua Ha’Mashiach, in May 1987 and graduated from Rhema Chapel Bible School, Nigeria in 1992. His calling includes the Deliverance, Intercessory & Teaching Ministries as well as a prison outreach through which Yahweh is working tremendous miracles.

Michael Agunbiade, Ph.D. DD is a Scholar/Cleric and also a Teacher and Evangelist (Psalmist), supporting ministries internationally. He was miraculously healed by God from a serious case of Pneumonia which threatened his life in 2010. In 2011, he and his wife were led by God to begin a marriage ministry in their home. Till date, the marriage ministry has enriched several Christian married couples and families as God has been honouring His word in the lives of many.

He met his beautiful, God-fearing wife in March 1989 and they were married a few years later. Their union is blessed with wonderful children.

Dr. Michael is an engineer with BSc. in Physic and MSc. in Electrical Engineering and Engineering Management. His expertise is in General Engineering contracting, Pharmaceutical Equipment & Clean Area Deployments, Eco-Building & Construction, Renewable Energy and Environmental Sustainability.

His daily life routine is to fulfil all righteousness, preach the gospel, heal the sick & set the captives free in the mighty name of Yeshua Ha’Mashiach, and also continue to live a life of holiness till Yeshua comes.

Him, his wife & children are influencing their community/society and the world in obedience to the call of God to win the lost sheep back to the Good Shepherd, YESHUA the MESSIAH.

Since he became a Commissioned Pastor, his tasks and responsibilities have increased  greatly. His love and passion for humanity have driven him to fight for Christian families & marriages against Lucifer and his legions/agents. Even though his tasks have increased in the vineyard, with the help of his wife and children,  he is daily loaded with God’s beneficial strength, peace, and joy in the Holy Ghost, to fulfil his calling in Ha’Mashiach Yeshua.

Driven by a passion to see the less privileged of our world get fair and equal justice, Michael went on to study Human Rights Law to enable him fulfil God’s calling to help fight for the rights of victims of injustice and the ess privileged people against prejudice. He joined a political party in 2004, eventually becoming the party’s Ethnic Minority Representative in his constituency.

Harmony Streams Ministries (HSM) is anointed of God to particularly rescue families and individuals from the onslaught of Satan and his hosts of demons in this end time.

We are not ignorant of the devices of the devil; we know his chief and foremost plan is to undermine marriage and by extension the family. But God has called us to stop him. Through knowledge and understanding and by the grace and anointing of the Holy Spirit, your family and marriage will stand strong through all challenges. More so, God has called and anointed us to minister deliverance & healing to the captives. A lot more people are in bondage to sin, sicknesses, addiction, and perversions of all kinds. We know and believe God wants them free. HSM is about setting all of such people free as is the Will of God through our master and Lord Yeshua Ha’Mashiach.

15 He said to them, “Go into all the world and preach the gospel to all creation. 16 Whoever believes and is baptized will be saved, but whoever does not believe will be condemned. 17 And these signs will accompany those who believe: In my name they will drive out demons; they will speak in new tongues. 18 they will pick up snakes with their hands; and when they drink deadly poison, it will not hurt them at all; they will place their hands on sick people, and they will get well.”